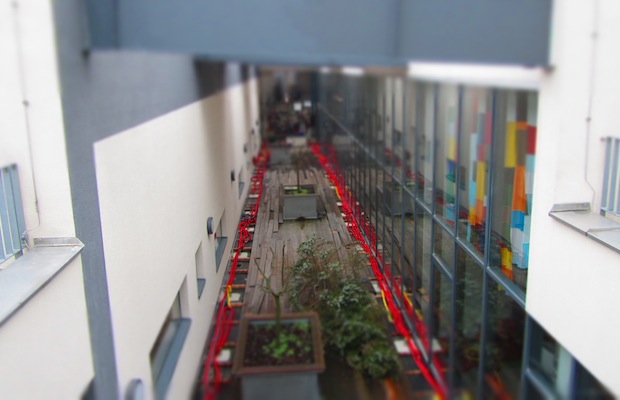 So, boys and girls, we’re officially all back on board to take on 2011.

The first two weeks of the year weren’t as uneventful as they may have seemed. At least around here.

We were finally able to get rid of our Christmas tree which was losing needles by the ton. It got as far as the atrium. Our snowman melted away into oblivion. And our atrium has been turned into a a colorful collection of strange pipes. Kind of reminds me of my screensaver of old.

It would be cool if those pipes had something to do with a new t-shirt printing technology. Or if we had discovered oil beneath our HQ. No, we simply had a pipe burst in our heating system. This created an unnaturally beautiful waterfall to our production below. These pipes are drying out the damage beneath and simply look ominous.
[nggallery id=23]
What else is new?
Yesterday we chose the winners of our “Shoplifting” Spreadvent post. Kes von Mauseohr won the top prize, CSS improvements, while Trill and Dodisdodat won banners and Crafty Designs a vector graphic. Today we are also going to get working on our T-Shirt Frames and we’ll be sure to show you some pictures of our DIY project.

What to look forward to?
First the weekend. Then you can start looking forward to International Sweatpants Day – next Friday January 21st. Here’s the “official” Facebook event with over 400,000 already planning to attend.

We’ve also got something the Germans call a Schnitzel Hunt prepared for you next week. Something like a treasure hunt through the Internet. But with a cooler name. Stay tuned.

And don’t be surprised when we come out with new products, like the coffee mug and the re-usable water bottle.

Our 2020 Year in Review: Thank You!
More and More Design Uploads & How We Deal with Them
A Timeline of Covid-19 and Spreadshirt